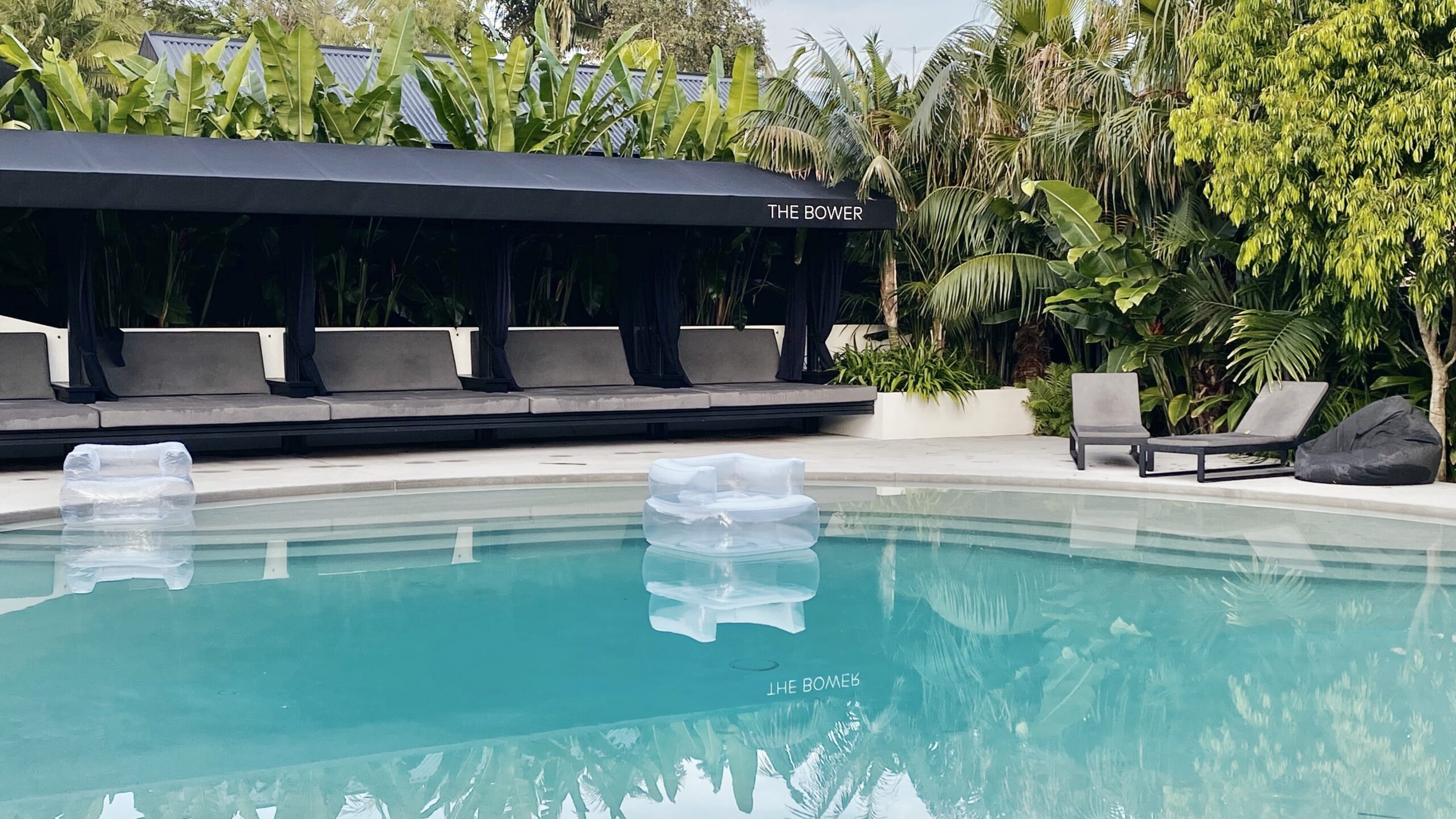 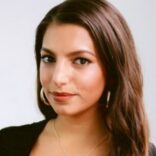 Nestled comfortably in the heart of Byron Bay, The Bower looks more like a New York style loft than a beach retreat. On paper, it is a hotel reviewer’s dream.

Bleached concrete contrasts against the black metal accents and soft furnishings. It’s an establishment ripped fresh from the cover of an interior design magazine, considered at every angle, and begs to be photographed.

Rather than book online, I called to make our reservation. The pleasant and helpful voice on the other end of the phone informed me that the studios (the most expensive rooms in the hotel) had just recently been renovated, piquing my interest.

So we could get a view of the latest and greatest, I grabbed a newly-renovated studio for a night, followed by a queen superior room for the rest of our week-long stay. That way I’d be able to more accurately report back on the character and charm this hotel.

The Bower is only about 300 metres from one of the fashion landmarks of the area: the Spell and the Gypsy Collective flagship store on Bangalow Road. From there it’s about a 10- to 15-minute walk into the centre of the CBD – or a two- to three-minute journey by car or bike (they’re the same, given a bike can skip the traffic you’ll likely encounter).

The Bower is close enough to town that it’s convenient to go on foot, but just far enough from the noise of Byron’s nightlife that you’ll enjoy a peaceful sleep. It’s also right next door to one of the most highly rated cafes in town, the Byron Bay General Store, so you won’t have to go far for a good coffee – although there is decent French press in your room offered free of charge if you’re in a pinch.

Naturally, I was very keen to see the pool. The images plastered all over The Bower’s Instagram created a lot of hype in my mind, and reality didn’t disappoint.

After arriving and checking in at the reception, we were shown around the property by a very helpful member of staff. High, black wooden gates give privacy to what is a contemporary oasis, with a shaded cabana area, umbrellas, recliner chairs surrounding a grand, circular pool.

The water is just what you’ve seen in pictures: crystal blue and clear. It’s a salt-mineral pool rather than chlorine so it’s more soothing and relaxing experience to swim in. It’s also lightly heated. It’s not icy when you get in, but it’s still refreshing.

The pool area is open for use from 8am to 7pm (don’t try to sneak in after hours, as the staff lock the gates) and the pool bar is serviced from 3pm to 6pm if you fancy a drink or a snack.

There are four shaded cabana areas, four sets of recliner chairs plus some bean bags, which is plenty given the capacity of the hotel. I never had an issue finding a place to relax for the day. It’s a lovely spot to park yourself and chill out for the day. It’s comfortable and surrounded by greenery. Your own private oasis. Mostly.

The only issue can be from loud family groups – this is a family-friendly establishment and there are some groups that don’t respect the loud noise policy. I had to exit the area twice due to excessive noise and splashing in the area, but luckily, I managed to snag a few peaceful hours at the pool before it was disrupted.

Born in a different era of Byron, the property is a converted motel-style complex. Each room is accessible from outside and comes with it’s own allotted car space for easy access. A hotel designed for beach-goers, all rooms have an entry area with a bench and wall hooks for your wet and sandy things.

The Studio rooms have a black gate that leads into a private external entryway – an outdoor mud room of sorts. A black-framed sliding door reveals a cavernous room draped with soft furnishings.

Slanted high ceilings give way to an imposing king-size, black-metal, four-poster bed. Decorated to the nines, wooden side tables and blue linen bedding add light and warmth to the cool black and metal in the space.

The floor is clad with large concrete tiles that lead past the bed to an expansive white, island bath and floating black vanity. Floor-to-ceiling black curtains offer a privacy shield between the bath, shower and toilet and the rest of the room. But be warned, they don’t offer a full cover or muffle sound – so if you’re travelling with a partner, you’ll want to be very comfortable with them.

A medley of art print halo a queen bed which (just like the Studio room) is clad in soft and airy linen covers. Queen Superior rooms come with a second single bed near the bathroom, perfect if you’re travelling as a group of three.

The bathroom looks very much like something on a New York design Pinterest board with its subway tiles, a vessel basin and brass taps and faucet.

All rooms come with grey linen bathrobes and a lush selection of mini bar treats including everything you’ll need for a cheese board and Eveleigh Bottling Co. cocktails to pair.

Likewise, the in-room toiletries are a real delight. You’ll find sweet smelling Kevin Murphy products in the shower and Le Labo products of on the vanity. I’m a huge fan of the incredibly pricey products at Le Labo and was very happy to find the room included a moisturiser in my favourite scent, Santal 33.

While I stayed in both newly-renovated The Studio and the Queen Superior, there lots of other accomodation options at The Bower. Other rooms on the property include The Bower Barn (a 2-person apartment style room), The Bower Cottage (a house with four rooms, good for groups or those that don’t mind a shared living space), The Bower House (similar to the Cottage), The Deluxe King Rooms (a large hotel room with a king bed and large bath), The King Rooms (large hotel room with a king bed) and The Queen Room (a smaller version of the Superior Queen I stayed and with no extra bed).

The Service and Extras

I was quite impressed by the service at The Bower. I’m not sure exactly what I was expecting, but generally I’ve found that beautiful spaces often able to skate by on their appearance, and can often have a lower standard of service. This was not the case here.

We never called to request early check in and yet we received a personalised text message during the mid-morning alerting us that we would be able to check into our room at 10am – four hours prior to official check in time. It was a nice perk, and you could tell it was written by a human and not some mindless check-in system robot.

We also booked a Studio Room for just one night and switched thereafter. The Studios have a two-minimum stay, but the hotel waived this for us so we could test it out. Another little perk: slippers are not included in rooms outside of the Studios, so we didn’t have them when we moved into the Superior Queen. But we called and asked, and they gave them to us anyway. The staff really did go out of their way to make us comfortable, a fact relayed to us by other guests we encountered.

There are lots of little other touches that make you feel especially welcome at The Bower. The hotel has onsite bikes that you can borrow to explore town or the beaches nearby. This includes smaller bikes, complete with training wheels for little children.

And while the hotel does not offer room service or have a kitchen, it does have the option for you to request hamper and picnic baskets for breakfast and lunch. You’ll need to give them a little bit of notice to prep them of course. They include a whole host of yummy treats that cater for two or four people. Otherwise you can just snack on the food in the mini bar which includes crackers, cheese, quince and salami. Each room gets a $20 mini bar credit upon check-in, so why not?

Again, there is no onsite spa, but the hotel has an arrangement with beauty therapist who can provide in room treatments including massages and facials. The company is Aleisha Marie Beauty, and you can read more here.

What I was particularly impressed by was the compendium recommendations for the area in each room. Next to your mini-bar, you’ll spot a little black book that includes maps, recommended restaurants and bars, walking and bike tracks, best spas and beauty spots, shops and sites to see.

We had a reasonable idea of what to do in Byron based on some guides we’d read online, but those guides didn’t really compare to the local knowledge we found in The Bower’s compendium. It definitely made my time in Byron a lot richer.

My partner and I will definitely be coming back to The Bower, and we’d love to see you poolside.

Head to The Bower website to book your very own retreat or browse through our other travel guides. 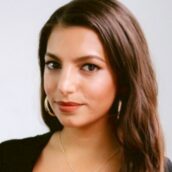