Apple’s on a mission. An iPad for every budget and use case. The new iPad Air is here to slot right in as the unit for those who need power every now and then.

It’s absolutely worth the money, but has just one catch.

If you’re looking at a side-by-side comparison of the new iPad Air compared to the iPad Air we reviewed last year, you might end up scratching your head.

The design, storage options, speakers, connectivity and screen are all the same. But there’s one important difference that sits the new iPad apart from its predecessor. It’s the change from the A Series processor to the M1 powerhouse.

For those new to the Apple CPU game, let me break that down. The A Series chip has featured in just about every iPad and iPhone spanning back over a decade. They’re fantastic little power plants designed to push iOS devices to the limit.

The latest change-up from A Series to M Series processors represents a massive gear shift.

The M1 chip inside the iPad Air I’m writing this review on is the same M1 processor found on the MacBook Air, the Mac Mini and the 2021’s MacBook Pro. It’s a seismic shift, and an absolute testament to how good Apple is at in-house processors, that the M1 is now in a mid- to high-range iPad.

What is Apple M1 processor?

The M1 chip is an Apple-designed and manufactured chip that first powered the company’s laptops, and now runs the iPad Pro and Air line.

We went into a deep dive on the M1 chip and what it means when it first came out. You can check it out here. 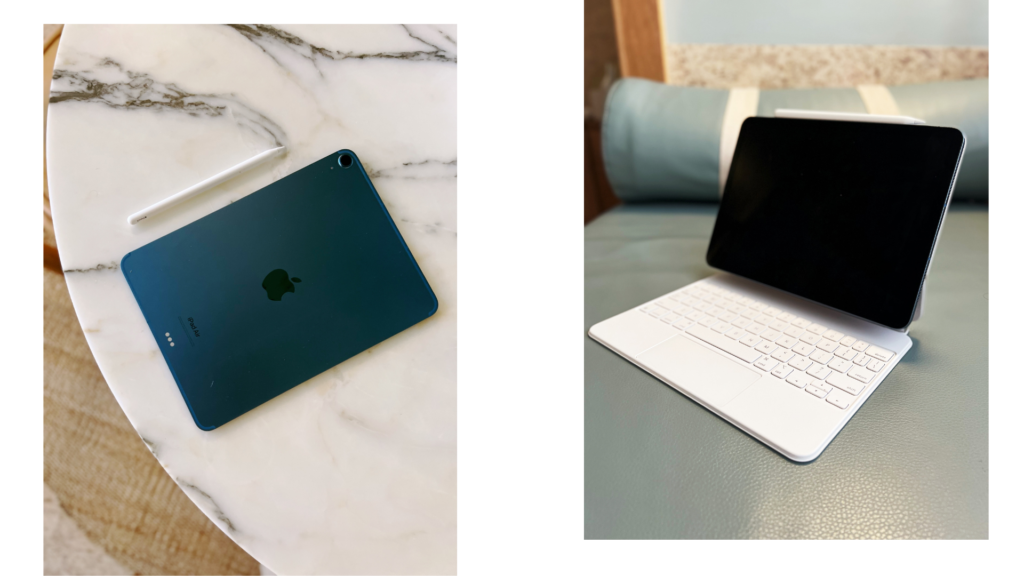 As mentioned, the design of the iPad Air (Gen 5) is almost identical to that of the previous iPad Air we reviewed extensively in 2021.

I say ‘almost’, because there are a couple of key differences. The first, is colour.

We’re reviewing the new Pacific Blue iPad Air (Gen 5). It’s a gorgeous satin blue colour that shimmers in the daylight and simmers in the moonlight.

It’s one of a few new colours for the iPad Air range, including Pacific Blue, (other colours).

The other difference with the design in this year’s iPad Air compared to previous years is how it feels in the hand.

Previous iPad Air models felt incredibly sturdy. They were solid in the hand and felt like the go-anywhere, do-almost-anything iPad.

This year’s model feels a little different. Compared to the sturdy models we’ve previously reviewed, there’s a bit of creaking in the new model. It’s not a design flaw, and I’m hoping it’s limited to just my review unit, but the new iPad Air creaks in the hand. Especially when you hold it around the centre on the front or back.

It’s almost there’s a new air gap in the current generation where there wasn’t in previous models we’ve tested.

Like I say, I’m sure it’s just my review unit, but just in case it’s not, you were warned.

It doesn’t affect the way the iPad runs, not even a little bit. It’s just a micro-nitpick I’ve noticed while reviewing an otherwise perfect tablet.

The new iPad Air isn’t the first to be equipped with the beefy M1 processor. That honour goes to the previous generation’s iPad Pro.

But now the technology has trickled down for the iPad Air. And that’s a great thing.

The choice between M1-powered iPad Pro or Air devices comes down to how often you plan on testing the limits of your power plant.

The iPad Air (Gen 5) has a bit of a split personality. It’s a consumption device that can tackle hardcore projects like Photoshop and iMovie editing every now and then.

But if you’re someone who needs an ultraportable device with a full-time powerhouse processor, Apple recommends the iPad Pro.

That’s at least the prevailing wisdom, however. I’ve found it to be much of a muchness.

Having spent a fair bit of time with the Mac Mini M1 and the MacBook Pro M1, I don’t find the M1 processor in the iPad Air (Gen 5) to be any sort of slouch.

It offers incredible processing power inside a tablet 1/8th the size of the two models mentioned above.

Sure, you might find the iPad Pro a little faster when editing video or running Photoshop exports, but for the vast majority of your tasks, I find the iPad Air (Gen 5) more than sufficient.

To give you an idea, I run my day job, and Redaktor from the iPad Air, and don’t find it slowing down, making me wait or suffering from bandwidth constraints even a little.

Is the iPad Magic Keyboard still worth it in 2022? When we reviewed the iPad Air (Gen 4), I spent a lot of time talking about how it was absolutely transformed by the Apple Magic Keyboard.

The Apple Magic Keyboard is a rigid case that magnetically bolts your iPad into place, giving you both a keyboard and a trackpad.

The keyboard and trackpad connect to the Magic Dock on the back of iPad Air so you don’t have to use Bluetooth to get connected or keep it going.

The new Magic Keyboard comes in a white colour (as opposed to the black we reviewed), and features an illuminated keyboard that automatically turns on when it’s low light.

The changes on the new Magic Keyboard are minimal, but it’s still the best accessory you can purchase for the iPad Air.

It transforms it from just another tablet that sits flat on your desk to a multipurpose laptop replacement.

Sure, you can get third-party keyboards and trackpads that work with the iPad Air, but the first-party Magic Keyboard feels so much cleaner and tidier.

Simply snap it in and away you go. No fuss, no mess. No fiddling with third-party apps, Bluetooth connections or cases that turn it into a nightmare to carry around. It’s a clean, simple and costly solution to bring your iPad to life as a productivity powerhouse.

As previously mentioned, the iPad Magic Keyboard isn’t cheap. You’re looking at $xx to get your hands on one. That’s almost twice the price of third-party alternatives.

In my opinion, it’s still worth the price, however. The iPad just isn’t the same without it.

For my money, the iPad Air (Gen 5), plus the Magic Keyboard, is the best tablet on the market right now for the money.

It’s not too big, but not too small. It’s powerful enough to do everything you need it to, and small enough so you don’t notice it in a backpack or handbag. For your money, you get a smart, extremely capable and stylish device that doesn’t mess around.

I mentioned in my previous iPad Air review that it’s the device that can replace your laptop. That’s still true, and then some.

The new M1 power plant at the core of the iPad Air (Gen 5) makes it your new favourite device.

No longer will you need to bring a laptop and an iPad on holiday or even to the office with you. It does everything you’ll need it to, and then some.

It’s the power-iPad for everyone, and I love it.